In a previous post I spoke about wireless power transfer and some engineering I was trying to do with it. This project proved to be very effective, and I’m quite happy with the results I got with it. I’m quite certain someone already had this idea, but the hobbyist endeavor is really useful anyways! And we all know the world is way too big, so sometimes it’s better not to bother to be innovative and just enjoy the build. Anyways, I thought maybe I could give my two cents to the DIY hackers community!

I wrote at Instructables (here!) a simplified guide to making this display. There’s no reason to cover it again in the blog, so I’ll just dive further here for those who want to play along at home (as Dave Jones from EEVBlog would say…). I’ll nevertheless talk about the build because that would be a shame not to be in this blog anyways:

So, as any other design, I begun with the question: What can I do with the process I have at my disposal and the budget I have? I knew a guy that had a laser cutter (he would charge me anyways, but at least I knew him). Also, I inevitably would have to lathe at least one part, because I don’t own a 3d printer and I need to connect my motor shaft to my display. So I set the budget to be ~100 USD (plus whatever I already had) and I begun with the overall characteristics:

“How many pixels I want?” – Well, I contacted a PCB supplier that told me he would cut 200x200mm PCBs no problem. I wanted to have the LEDs directly in the PCB, so the restriction was set: Radius of ~85mm -> Angle of ~150 degrees (no point in having the south pole as it would be covered). Run the numbers for a 5mm LED and we get ~40 LEDs max. Any electrical restriction? I had some PIC16F877As lying around. They have 4 full 8bit ports, which makes it really useful to easily toggle all LEDs at once in the routines (I’m not that great of a programmer, although I like to use the PIC!). I ended up using 4 ports, but only 6 bits each port. That was a total of 24 LEDs. It’s not great resolution, I know, but it’s a first prototype so bear with me ^^

“Update rate?” – Well, at least 20Hz to be convincing, right? I had an old fan motor lying around (haha!). I didn’t know its speed though. But I have a function generator, so I made a quick stroboscopic tachometer and measured its speed. The tachometer is just an LED and a resistor connected directly to the function gen’s output – Adjusting the frequency until you see the motor freeze. Then make sure that 1/2x the frequency doesn’t freeze the motor. It turned out to spin at 30Hz. Unfortunately, after loading it spun only at ~24.5Hz.

“Can I update these pixels fast enough?” – The individual signal rate would be easy to deal with – 30Hz * ~180px per revolution = 5.4kHz. How many processor cycles do I have to perform my calculations? (20MHz/4)/5.4kHz=926. That seems to be enough. But I still need to nail that update frequency (5.4kHz) quite well, to less than half a pixel, so the effect actually is convincing (otherwise there’ll be too much jitter in the image). That means, 5400±7.5Hz. Or, between 924.6 and 927.2 cycles. plus/minus 1.5 cycle. That’s more challenging. I mean, it can be done, but I think that’s possibly the limit for this PIC frequency. Unfortunately to have a faster clock I need to buy another microcontroller, which I don’t want to. So let’s give it a try =)

“How much power do I need if the display is fully on?” – That’s an easy one: 24 LEDs at 5V, 20mA – 2.4W. On the transmitter side, probably close to 10W given the inefficiency of a homemade device. The IRF630 should deal with this no problem.

Now that I had some idea of what I wanted to do and what would the limitations be, I dove into the PCB design. In my design the PCB spins and it looks like:

I confess routing the LED connections was quite difficult. I’m glad I chose not to use 52 LEDs now! For more LEDs sure I would need a 3D arrangement, or some sort of serial system. But for a beginner let’s keep it easy.

It was quite straightforward to design the case around this PCB. I chose to cut most pieces out of acrylic, but as I said – one of them had to be lathed. The connection between the motor and the spinning part. The design looks more or less like that:

It’s sad but at that time I didn’t harness the power of the Prusa. Thus, I couldn’t print the shaft connection. The entire project would be different had I had a 3d printer by then.

Yes, electronics are expensive in Brazil. And yes, hardware is cheap.

As I received the parts I began to build. Apart from hours of building, I didn’t actually have any trouble with it. Slowly building and checking the parts of the circuit were working as supposed, it wasn’t really eventful. The worst thing that happened was one open trail at one LED (which means the PCB manufacturer wasn’t really great), that I had to bridge. Below are some build pictures: 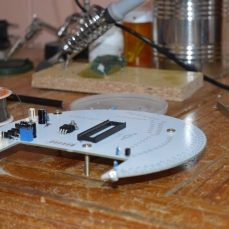 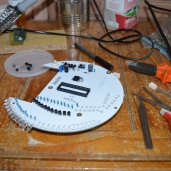 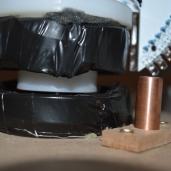 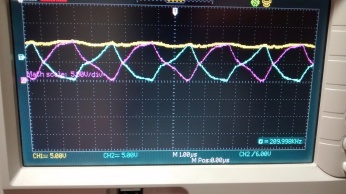 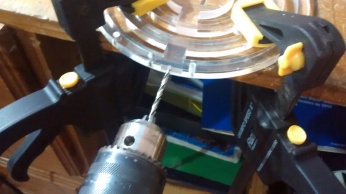 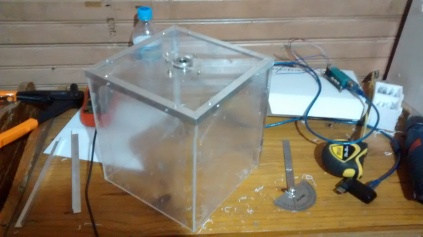 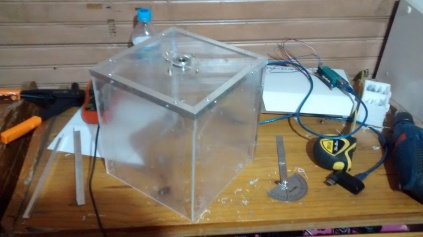 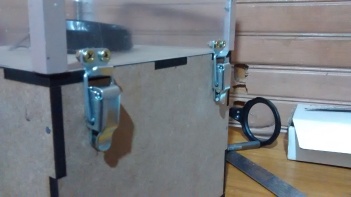 That was hours of fun, as you might be wondering. I know it’s not the best of its category, but it’s my child!

That’s the boring-to-talk about but fun-to-do part where you get to use the device you built and actually bring it to life. Yes, the issue of having a precise timing actually appeared during the programming. Also, it turned out the motor didn’t have a constant speed, but it oscillated between 24 and 25Hz. Fortunately I had a zero datum activated by an IR LED. That helped a lot but didn’t completely solve the jittering of the motor. Below are some “failed” tests while I was programming it: 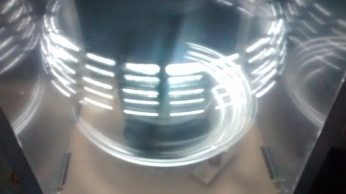 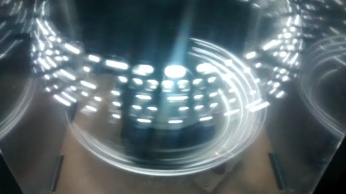 I’m sure you want to see the finished product working. So there it is:

Well, as you can see this is more of a picture repository than anything else. If you want to take a closer look at the project, please check my Github page at https://github.com/3dfernando/Wireless-Power-POV-Display. The project files are all stored there.

I’d say the biggest lesson learned from this project is that processor speed is crucial for any display device. To update so many pixels, there’s just not enough time. I built an increased admiration for our high-resolution full HD screens. What an engineering feat!

I'm a brazilian Mechanical Engineer and PhD, currently a Postdoctoral Scholar at Florida State University, working in various projects in aerodynamics, aeroacoustics and flow control. In the past I've worked as a refrigeration systems designer and later as an R&D specialist at a refrigeration contracting company, researching for new products to push the industrial refrigeration market technologies forward. Currently I'm working with experimental aerodynamics at FSU, using state-of-the-art equipment and techniques to observe the most intricate flow physics! View all posts by Fernando Zigunov